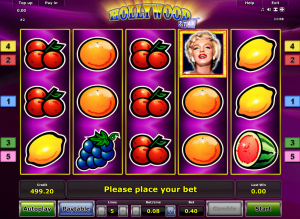 This is a really simple game with 5 reels and 5 fixed pay lines. You can bet from 8 to 2000 coins on each line. But the stakes are a minimum of 0.40 coins per spin. Even though it is a Hollywood based game, there are not many Hollywood stars on the slots here except Marilyn Monroe. This game would better have been called the Marilyn Monroe slot, because other than her, the slot only has fruits on the machine. Since it is a game from Novomatic, the graphics are still good. Also try out Hold Your Horses and European Roulette.

The game will begin with you entering some amount to play. However, there are no bonus rounds or extra features here which might have been interesting given the theme of this game. So the basic game of 5 pay lines might interest the traditional players, as on the simplicity front, this game is a 10/10. Pay out wise, this game is average – neither too high nor too low.